Opening sentence: “Until the Russian turned up with his entourage, I was the only person at the funeral, and I had come two and a half thousand miles to be there.”

Welcome to my stop on The Golden Orphans blog tour! This was a quick read that made my recent train journey go by in a flash. The book opens as we meet our unnamed narrator, an artist, at his mentor’s funeral in Cyprus. He received an invitation, but soon discovers he is the only person invited to Francis Benthem’s funeral… Why that is becomes clearer as he meets Francis’ mysterious Russian benefactor, Illy Prostakov, who has a proposition. He needs someone to slot into the gap Francis left, living on his luxurious, isolated property and painting for him, in exchange for a not unsubstantial sum of money… Throw in shady characters, some Russian mafia, an abandoned town and discovering just who exactly are the Golden Orphans and you have all the elements for a clever little thriller. I loved this sinister, intriguing premise – it had me drawn in from page 1.

I’ve never been to Cyprus, but this book is very visually evocative and really made me feel like I was there; I felt the heat of those lazy Cypriot evenings and the rolling beauty of the landscape. Cyprus is described as, ‘an island for those who cannot settle’ and this theme comes across clearly too: The infamous party town of Ayia Napa wonderfully depicted as dark and seedy – ‘Trust me, you have never been to a more couldn’t-give-a-fuck place in your life.’ As Cyprus is new to me, I was researching the places mentioned in the book (to get a better feel for what’s described) and found this very interesting interview with author Gary Raymond about why he set his book in Cyprus and used the locations he did, including the creepy abandoned town of Famagusta.

The Golden Orphans had a perfect pace that made it very readable. The scene is set slowly – but, crucially, not too slowly – through the first half, then things really step up a level in the concluding half. Part thriller, part mystery, this is a great read with a sinister undertone that means you keep turning those pages.

Thank you to Emma Welton from damppebbles (@damppebbles) for inclusion on this lovely blog tour! Get your copy of The Golden Orphans here.

Gary Raymond is a novelist, critic, editor and broadcaster. He is the presenter of BBC Radio Wales and The Review Show, and is one of the founding editors of Wales Arts Review. He is the author of two novels, The Golden Orphans (Parthian, 2018) and For Those Who Come After (Parthian, 2015). He is a widely published critic and cultural commentator. 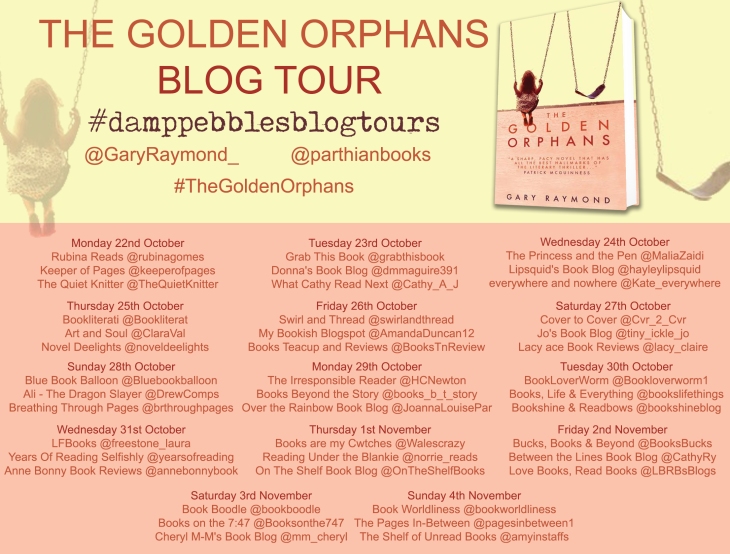 Search for a book or author:

My first #AgathaChristie of 2022 - better late than never!
Sunday morning 🌞
I couldn't let #WorldBookDay go by without a post now, could I...
I wanted to share this quick read as it's brilliant! If you're into historical fiction, you'll love this too.
Happy 2022 all!
Like your festive reads with a sprinkle of murder? Me too. This set of 4 short stories from crime legend P.D. James were all excellent.